Oil and Gas Regulations
Companies interested in exploration or production of hydrocarbons in Florida are regulated by what’s called the “Oil and Gas Program” (Chapter 377, Florida Statutes and Rules 62C-25 through 30, Florida Administrative Code) which is the permitting authority with the State’s Department of Mining and Minerals. This program is charged with conserving oil and gas resources, protecting related rights to oil and gas, maintaining human health and safety, and protecting the environment.

Florida Law establishes (337.371) that pollution is prohibited, that spills be reported, and that the driller is liable for damages. And while neither Chapter 337 nor 62C-25 through 62C-30 of the Florida Administrative Code make any reference specifically to hydraulic fracturing, because any fracking activity would be considered of the oil and gas sector, drillers would not be able to pollute land, water, aquatic or marine life, wildlife, birds, or public or private property, nor may they allow for pollutants to damage any mineral or freshwater reserves.

Florida Fracking Regulations
While there is no State level regulation to address hydraulic fracturing (there are local resolutions and ordinances), recently, members of the Florida Legislature attempted to introduce legislation that would have regulated fracking in the State, with the argument  that it was important that fracking activities be regulated so that they would not have adverse environmental impacts. This of course implies that if regulated, the activity “could” move forward.

While the proposing legislative representative hailed the bill as a law that would protect the environment from fracking, environmental groups opposed the legislation as they considered it was an attempt to pave the way for legalizing fracking in Florida. While the House bill was approved in 2015, the Florida Senate’s version, Bill 318, was narrowly defeated in early 2016 by a 10 to 9 vote.

Fracking Bans in Florida State
Legislation attempting to ban, limit or simply to declare opposition to hydraulic fracturing activity has been on the rise in Florida State since the State Legislature began efforts to introduce laws to regulate the activity. Nearly three dozen counties and 50 local governments have already taken steps to express their opposition to and in some cases to outright prohibit Fracking in Florida, although in parallel State officials have taken measures (so far unsuccessful) to not allow local government discretion to take steps to stop fracking.

It should be noted that by State Law, while the State of Florida grants exploration and extraction permits to companies to carry out oil and gas operations, local government must first accept/approve projects at the local level. In this sense, local governments already have the capacity to “ban” fracking if they so chose to do so. What has not occurred yet is a systemic ban on the activity. Since no regulations exist at the Statewide level to regulate fracking, the activity today is in a sort of “legal limbo” in which the State may grant a company a permit to carry out hydraulic fracturing and then it would be up to the local government to grant the necessary local permits to actually get the activity underway.

A recent example of situation that occurred with a fracking permit which has resulted in a strong reaction from local governments and which has led to many of the new resolution today, involves a permit application by the company Kanter, which applied for a deep oil drilling exploratory permit to the Florida Department of Environmental Protection. The project was to be located in the Florida Everglades. Several cities and counties reacted to the knowledge of this permit application, such as Pompano Beach, which passed Resolution 2015-399, stating,

“Section 2. The City of Pompano Beach hereby publicly expresses its vehement opposition to the exploratory oil drilling operations sought by Kanter Real Estate LLC … ” This reaction was echoed by dozens of other local governments, which saw the Kanter request for an exploratory permit to be the floodgate door to many other possible intents to bring new oil and gas operations to the State of Florida.

This reaction translated to what we have seen occur during 2014-2015. Local governments, including both cities and counties, have taken legislative steps passing ordinances or resolutions to either anticipate local government positions or by specifically establishing regulations prohibiting oil and gas operations, specifically ones associated to hydraulic fracturing.

A common theme to many of these recent local government resolutions is not a direct “local ban” on fracking activities, but rather a local  city or county declaration and position calling for Florida State to pass a State-wide ban of Fracking.

Escambia County, for example, in its resolution R2015-108 states,

“That the Escambia County Board of County Commissioners, without a better understanding of and study on the impacts on citizens, water, and geology within the State of Florida, supports proposed legislation on a statewide ban on the use of hydraulic fracturing, acid fracturing, and well stimulation treatments performed for the purposes of exploration and production of oil or natural gas in the State of Florida due to the potential harmful impacts on the public health, environment and natural resources of Escambia County”.

Another approach to many of the new local government resolution appearing throughout the State of Florida regarding hydraulic fracturing activity is what might be considered a “statement of intent” by local city or county commissioners declaring that the local government is “opposed to the activity”. It is questionable what is the legal value there may be to such a statement, as it is not an outright prohibition, but rather a statement of opinion of the commissioners.

Broward County, for instance, in its county resolution 2015- that,

“Section 1. Broward County opposes the use of hydraulic fracturing, acid fracturing and any form of extreme well stimulation, for purposes of resource extraction in the State of Florida.” It is immediately noticeable that Broward, in this clause has extended its expression of option beyond its legal jurisdiction, to include the entire State territory.

Like in the previous example of Escambia County, Broward also calls for a “statewide ban” of the activity. “Section 2. Broward County urges the Florida  Legislature to enact legislation prohibiting the use of hydraulic fracturing, acid fracturing and any form of extreme well stimulation for the purposes of resource extraction in the State of Florida.”

While the many local government  calls for a “statewide ban” may not seem legally relevant if one considers potential legal conflicts regarding permit issuances, what clearly is important by these recurring statements in more and more local ordinances, is that they are setting the political discourse and legitimacy in place at the state level for State Legislatures to make a move to ban hydraulic fracturing at the State level.

In some cases however, local governments have moved to “ban” fracking, addressing the issue more forcefully and with greater legal resolve. The City of Bonita Springs Florida, for instance, in its Ordinance No 15-17, in reference to eventual “excavations” permits which could or would be issued by the city of Bonita Springs,

“No person or entity may engage in any oil and gas exploration or production that utilizes well stimulation within the corporate boundaries of the City of Bonita Springs … “. Unlike most other Florida localities, which have kept their local ordinances on hydraulic fracturing in the realm of political intent or simply calling on a higher authority to take the legislative action, Bonita Springs has taken a much stronger and definitive stance to actually legally block fracking in their jurisdiction.

“50-42. High-Pressure Well Stimulation prohibited. No person or entity may engage in any oil or gas exploration or production that utilizes high-pressure well stimulation”.

Finally, the Miami-Dade County stepped forward with one of the clearest and strongest bans on all types of fracking, stating in October of 2016 that:

“… the use of property for oil and gas exploration or production through the use of well stimulation, including any ancillary or associated activities, shall be prohibited. For purposes of this article, “well stimulation” is defined as a well intervention, exploration, operation, or maintenance procedure performed by injecting fluid, which may include additives, into a rock formation to increase the rate of production at an oil or gas well by increasing the flow of hydrocarbons from the formation into the wellbore. Well stimulation includes, but is not limited to, the processes known as hydraulic fracturing, acid fracturing, and cyclic steam injection, which are sometimes referred to as “fracking”, as well as matrix acidizing and fracture acidizing.”

(source of map: No Fracking in Florida ) 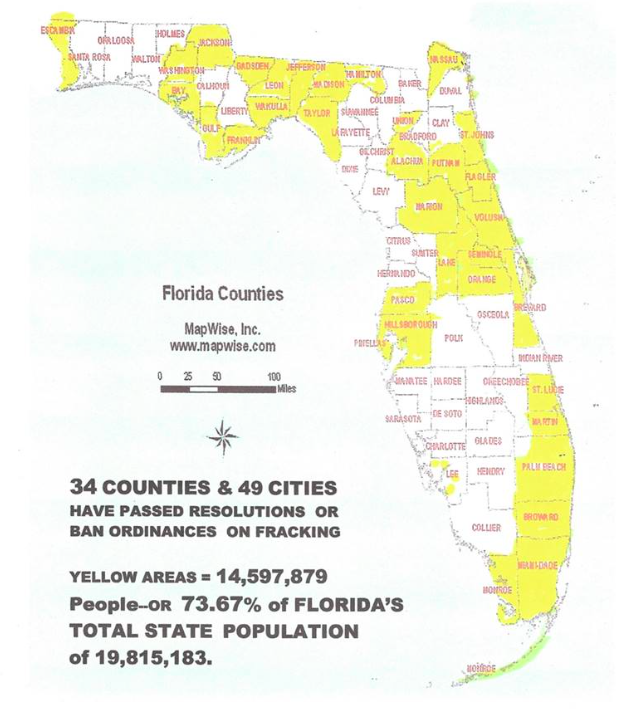